Not much to report today. Perhaps it’s the quiet before the storm. I spent several hours out on the covered terraza waiting on the Lord and reading in my Bible. I’m glad to be able to spend some “down time” with the family. And this evening we began working on the conversion of Tirsa’s old Asus Eee PC, one of the early, smaller netbooks. It came with Windows XP and it has become useless, either due to “Windows rot” or viruses. She has asked me to convert it to Ubuntu Linux, and I just may try the latest version. That would be a challenge, because this unit only has a 4 Gb “hard drive” (an overglorified SD card) and 512 Mb of RAM, with a very underpowered processor. Tirsa has been working on a “slideshow” for the anniversary tomorrow (on another computer). 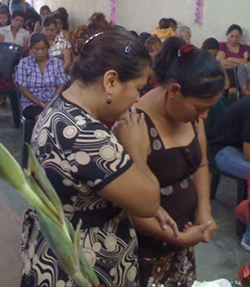 Today is the fourth anniversary of the day that Atilio’s church met in their new building for the first time. Strange to say, I remember seeing the building, a concrete shell of a place, on my first visit here in March 2008. How time flies! On that first visit only the Lord would have known that I would be the speaker for this anniversary. With Gladys translating for me, I ministered about the importance of focusing on listening in prayer, rather than speaking.

Pastor Atilio followed up with a narrative of God’s provision and faithfulness in their new building, although for him there seemed to be a shadow over his heart. A few feet from where he stood on the platform (and from where I had been standing just moments before) a young worship-team musician had been murdered in cold blood by gang members just months before. (The gang had come to steal the music equipment.) The young man had been visiting with his worship team at a combined practice on the Saturday it happened. No pastor wants to lose sheep, especially in this way. No parent wants to lose a child this way. Two of Atilio’s and Gladys’s children were there that day; the victim might have been one of them. But how often since the murder Atilio has heard the cry of the bereaved parents, prayed for them, borne their pain, and grieved with them.

A slide show (the one Tirsa had been working on last evening) was shown towards the end of Atilio’s narrative, and then the chairs were cleared, tables were set up, and all of us enjoyed a meal together. With the celebration thus ended, Marian left for another commitment, German left to help with the worship at another church, and the remaining four of us rode el pickup back home, stopping en route to buy some helado (ice cream) with which to sweeten the afternoon.

There was hardly time to rinse the helado dishes at home before we were leaving for my 4 PM preaching assignment. Although “two and two” hadn’t been put together for me until today, it turns out that I was to preach the Gospel at Jorge Cerritos’ church, Ciudad de Refugio (City of Refuge), in the town of Villa Nueva. The focus of Jorge's ministry and local church is abused, widowed, abandoned, and molested women of all ages. It was to be a Mother’s Day message, and Jorge’s son was to be my translator. But during the worship, I felt that the Spirit nudged me to have Gladys act as my translator. Given the focus of the message, that made sense, and so we changed right at the beginning of the message. I had been told that I must preach a Gospel message on what it means to be a good mother. (While I have Scriptural and ministerial authority to speak to what it means to be a good mother, I can’t speak from experience; so I was glad to have Gladys as my mouthpiece.) I preached on Mary’s words in John 2:5: “Whatever He says to you, do it,” and then proceeded to take my listeners into John 3 (new birth) and John 4 (living water).

I gave the altar call at the end, and Gladys was wise and experienced enough to take that and run with it, at a time when the broken rhythm of English-to-Spanish translation would have been awkward and (perhaps) ruined the moment. In the end, one woman came forward to declare her intention to follow Christ – Olga, the woman I reported on in my Day 2 report. Jorge’s wife, Annie, prayed through with her, and there was general rejoicing in heaven and on earth.

Later, all the mothers attending were presented with a small gift, and then everyone was served a sandwich and some drink as an evening meal. We returned home about sunset (around 6:45 PM local time) with a sense of God’s blessing. I wrestled some more this evening with the conversion of Tirsa’s netbook. Perhaps by tomorrow evening, everything on that project will fall into place.

Next post: 011 Grains from Gutteridge – The Ministries of John and Jesus