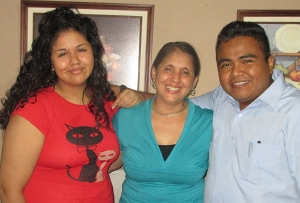 If you read yesterday’s entry, right down through the postscript, then you’ll know I mentioned a Bible the Lord had impressed me to give to someone. That act of obedience is now accomplished, and the full story can be told. (And I didn’t know the full story until after I obeyed and gave it away!)

My family feels a certain amount of frustration with me before Christmas and my birthday, because they don’t know what to give me, and I can never think of anything to put on a “wish list.” I pretty much have everything I need, and there’s not a lot I want. I have prayed over the years that Hebrews 13:5 would be true in me, and the Lord seems to have answered that prayer. (In that verse, did you ever notice at the end the satisfying why behind the exhortations at the beginning? Yes, I’m going to make you look it up!)

So, anyway, indecision or lack of desire on my part produces mild frustration for my family. “Dad, what do you want?” “I don't know. Nothing, really.” Four or five Christmases ago, I actually knew what I wanted, asked for it, and got it – a bilingual Bible. My English translation of choice is the New American Standard Bible (NASB), in my opinion the rendition closest to the original Greek and Hebrew. The Lockman Foundation, publishers of the NASB, also has its own Spanish translation – La Biblia de las Americas (LBLA), the The Bible of the Americas. And they have a very nice Bible with both of those translations displayed in double-column fashion. There was general rejoicing in the family – Dad finally knew what he wanted! Since Christmas 2007, I have used this Bible most every day for personal reading, and I have preached from in when in Central America. I’ve even read aloud through the entire Nuevo Testamento once using it.

Fast forward – not to this evening, but to lunch last Thursday, the first day of our teaching conference for pastors. My teaching session on reading/studying/preaching the Bible in context was off to a good start. The Holy Spirit specially quickened what I was teaching to one pastora named Cristina Chaves-Vargas. She and her husband, Oscar Morales-Toval, lead the Centro Misionero church-plant in Alajuela, a suburb of San José, Costa Rica. Both come from Adventist backgrounds, and since they left that denomination years ago, they have been avid Bible students, “searching the Scriptures daily, whether these things are so.”

I found a kindred spirit in Hermana Cristina. As an old friend, Tim Dickson, once observed, there aren’t many true Ephesians 4 teachers in the wild. They are rare. I believe that Cristina is one of them. She accosted me after the morning session was ended, and we chatted together as we walked down the hill from the open-air meeting hall to the open-air dining hall for lunch. Despite her limited English and my limited Spanish, we were actually making good headway in our conversation. Nevertheless, we convinced our group translator, Jimmy Hernández-Arroyo, to join us and facilitate our interchange.

As I sat there, listening to Cristina pour out her heart about all that the Lord had been teaching her over the years, the Holy Spirit spoke to me and said, “You are to give her your Bible.” He could only have meant one, because the only Bible I brought with me was my NASB/LBLA bilingual Bible. As fond as I am of that Bible, especially because of the sentimental meaning it has as a gift from my wife and daughters, I found no resistance in my heart. Denise and I have been taught by the Lord over the years that He owns what we have, and we hold it in trust for Him. If Jesus says to give such-and-such to so-and-so, we do it. But I did silently asked the Lord if it was okay to keep the Bible until the end of this trip, because I knew I would need it for the conference teaching sessions and for my preaching assignments in various churches. I had liberty to keep the Bible for another week. And I didn’t even hint to Cristina that anything was afoot.

Fast-forward again – Last night our team visited Cristina’s and Oscar’s church. They meet in a home that doesn’t have one room large enough to hold even half their congregation. The folks who sit in the kitchen can’t see the projected song lyrics, because they're at right angles to the screen. Most of the folks sitting in the “dining room” can. And some of the folks who sit outside the front door can see, but certainly not the ones sitting on the steps coming up to the door, nor the ones sitting outside at the front of the residence. (If you haven’t gathered already, they need a building! They keep on growing. I felt a bit guilty that we had taken up seven of their chairs last night!)

Our team arrived thirty minutes early. I pulled Cristina aside, and with her fourteen-year-old daughter, Naomi, acting as translator, I explained that I was giving the Bible to her with my blessing because the Lord had told me to do so. It was still in its original box. (I always keep the original boxes to protect my Bibles when I’m traveling. Don’t laugh! I have sealskin-covered King James Bible that’s over thirty years old. I used it constantly for years for preaching and study, but protected the cover and binding; it still looks nearly brand new.) Cristina was obviously touched…

…but not as touched as she was at the end of the meeting. Fast-forward again, through the worship, through Brother Bobby Hoyle’s timely message to the church, and into the birthday party at the end. (Tonight was the church’s second anniversary. From a core of five, they have grown to the point where they no longer have room for those who come – and they’re just getting started!) Cristina brought a friend over to translate. She told me, “The very first morning when you were teaching, and when we sat at lunch, I saw your bilingual Bible, and I asked the Lord for one. I knew we could not buy it, for money is very tight because of our many medical bills.” (Cristina was injured in a motorcycle accident and now has two herniated discs in her back. But that’s another story.) “So all I could do was to pray and ask Jesus for one. I want to learn English better.”

Now I knew the rest of her story, so I told her my side – when we were sitting together at lunch that first day, the Lord had already directed me to answer the prayer I didn’t know she had prayed. I was ignorant of her desire for such a Bible. And Cristina didn’t know that the Lord directed me to answer her prayer within minutes of the time she prayed it. It made the gift more special to both of us.

So, “Bye-bye, Bible. You were one of my favorites.  I’m sure you're now in the hands of a diligent Bible student and gifted teacher who will make even better use of you than I did.”  I like to think that Bible represents a lasting connection of friendship made with one of the Costa Rican saints. And, believe it or not, my family will probably be happy that I gave it away, because now they won’t have to be frustrated figuring out what to give me this coming Christmas!

Related Blog Posts: Tale of the Tangled Translator and A Letter Home from Costa Rica.

Next post: 012 Grains from Gutteridge – Jesus, Our Great High Priest and Intercessor