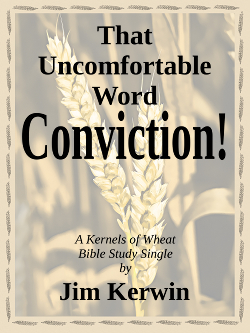 That Uncomfortable Word — Conviction! is now available for purchase as Kindle e-book.

Some of you know that we published our first e-book, The Rejected Blessing, on the Amazon Kindle and Barnes & Noble Nook platforms in late August.  During September, especially during my lonely bachelor existence for the last 11 days, a lot of work has gone into current and near-future publications. For instance:

Now if you'll excuse me, I have a house to pick up and dishes to do before my wife's plane arrives this evening!  And come Monday, I'll start the long process of preparing to leave for Romania…

Next post: 023 Kernels of Wheat — Will the Real Antichrist(s) Please Stand Up?