023 Kernels of Wheat — Will the Real Antichrist(s) Please Stand Up?

Show Notes by Jim Kerwin for Kernels of Wheat Podcast Episode 023 – Will the Real Antichrist(s) Please Stand Up?

A Short History of Antichrist 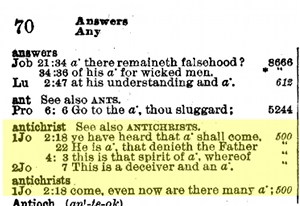 The entry for antichrist in Strong’s Concordance. These five entries–four verses–are the only places where the word ever occurs in the entire Bible. Note the plural in 1 John 2:18. Click on the image for a larger view.

Intro: In the old TV game show, To Tell the Truth, several panelists asked questions of three mystery guests.  One guest had a unique story or occupation or claim to fame; but the other guests were decoys, whose presence and answers were meant to deceive the panelists.  The panelists were allowed to ask questions of all three guests, and in the end had to guess which one had told the truth.  After they had guessed, the moderator would say, “Will the real [mystery guest] please stand up?” and the truth would be revealed.  Seeing the truth “stand up” in 1 John is our goal, with the help of the Holy Spirit.  In this episode, we will be looking for history and the Scriptures “To Tell the Truth” about what has — and should be — taught about the subject of antichrists.  “Will the real antichrists please stand up?”

Speculation Started with the Early Church Fathers (a sampling)

The Pope or Papacy as Antichrist (another sampling)

In the Twentieth Century (and in my lifetime), people “conclusively proven” to be “the Antichrist” by prophecy “experts”

“Sometimes it seems that there are more Christians looking for Antichrist than are looking for Christ.” — Rev. P.H.P. “Percy” Gutteridge

Will the Real Antichrists Please Stand Up?

This isn't a “game show.”  We want to know what the Bible really says about this subject, stripped of all of its historical baggage.  Will the real antichrists please stand up?  We will look to the Bible “To Tell the Truth” about antichrist in a whole new light in the next episode.

More Bible teaching by Jim Kerwin and others can be found on the Finest of the Wheat website.

Podcast theme music: “Steam Train” from the John Williams album Dusty Porch, under license from Magnatune.com.  Graphic was created by the author.

Next post: 014 Grains from Gutteridge – The Vine and the Branches