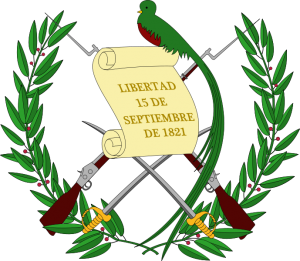 Coat of Arms of Guatemala

I’m writing this day after, because I was too wrung out to do it last night. Al Strickland, bless him, picked me up at “o’dark thirty” (04:40 to be precise), and I was being checked in at the Delta Airlines counter by 05:10. Both flights went well – on time, aisle seat, empty seat next to me, onboard WiFi working (until somewhere over the Gulf of Mexico). It was a productive time. I caught up on my New Testament reading in my pocket Bible, did my Old Testament reading on my Kindle (a weight-saving packing alternative) and fired off various e-mails and a few Facebook messages.

Upon arrival, the lines were short for inmigracion, but long for customs. Yet once it was my turn to be processed, I was through in sixty seconds, and most of that “delay” was because I asked for clarification about two fields in a form that needed the correct answer.

El líder of the churches I’m visiting here in Guatemala, Atilio Chávez, greeted me from the crowd just outside the arrivals building, and soon we were zipping along in his 2003 Toyota pickup (that’s the word in Spanish, too), a diesel. We had a small bifstec for almuerzo (lunch), and then went on to his home.

I could tell you of the greetings and interaction with Atilio’s wife, Dr. Gladys, and his teenagers, Tirsa, German (pronounced “Herman” in Spanish), and Mariam, all of which were happy. But by late afternoon, exhaustion was overtaking me. I was looking for a special word, a phrase I had learned, but it wouldn’t come to me. It should have been this – Estoy agotado – I’m exhausted. And I was. Many short nights of sleep, capped off by less than three hours the night before the trip, and arising at 03:13 — the “bill” came due and my account was overdrawn. Nevertheless, off we went across town through heavy street traffic to the small evening meeting, where I was asked to share briefly (but not to preach, thank goodness). I knew I was exhausted (I had to fight nodding off during the service) because I really did keep it brief, giving, essentially, a 90-second preview of what I will be preaching on Sunday morning.

I learned part of my schedule while I’m here. I knew about the four days of teaching and one day of travel (miércoles/Wednesday), but these are the newly added assignments:

Thanks, everyone for praying, and thanks for your paciencia. It’s hard to describe what a blessing it is to be here. I can probably get the Day #2 report up this evening.