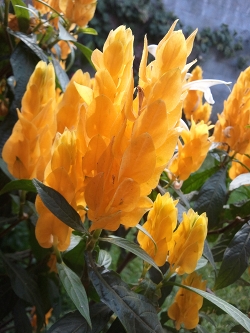 No, these have nothing to do with today's story, but I thought they were pretty, so I thought I'd include them. Gladys tells me they're called "camarones" (shrimp), and I guess I see the similarity. There are all sorts of flowers, fruits, and vegetables growing in the garden here!

Time-Sensitive Prayer Request: Dr. Gladys de Chávez, my hostess and translator for most of my time here, has been sick con gripe (with the flu) ever since I arrived, and she seems to be getting worse, not better, despite repeated times of prayer for her. She is to translate Sunday morning and for two two-hour sessions on Monday and Tuesday. (Her sister-in-law, Lilian [yes, no double “l”] will translate for me Thursday and Friday.) Please pray for complete healing for Gladys. And as a matter of prevention, please pray that I won’t catch este gripe from her. ¡No lo quiero! (I don’t want it!) Now back to our regularly scheduled daily blog post…

Me gustan las oportunidades de Dios. I love it when God gives us opportunities. That should be even more true when those opportunities are beyond our means to seize, and we have to rely on Him. I had three opportunities today, one pequeña (small), one mediana (medium), y una oportunidad grande (large).

My Teaching Materials Are Finished: The day started early, as days do around here at Casa Chávez. Maybe the six singing canaries outside my bedroom have something to do with the early rising. That praise and worship team starts early and goes all day long, putting most other such teams to shame by their pure, joyful, selfless, unending adoration. I went back to translating and reorganizing my seminar presentation, pausing only for some time before the Lord up on la terraza (the outdoor terrace off my bedcoom) and breakfast. I worked through until about 10:00 AM, even through the visit of a Pastor Marlón Villa-Toro and his daughter Amy. (The latter, visiting from Florida, and having attended college there, is a confirmed Florida Gator fan. I not-so-innocently asked her if Gator fans, when truly born again, became Seminole fans. Only her surprise fit of laughter kept her from slugging me, I think.) Having the dining room table double as la mesa de tarea (see yesterday's entry) has its advantages – I could work while Marlón y Amy took their breakfast.

Oportunidad Mediana: Shortly thereafter, Atilio and I were off to la impresora (the printing place) near the universidad to get 50 copies made of my 43-page handout, along with 80 pages of Pastor Cerritos’s handout. I felt that the Lord would have me pay for the whole copying bill, so I forked over 900 quetzales (the local currency, somewhere around 7.75 per U.S. Dollar) while Atilio was engaged in conversation. This is the sort of thing for which the saints contributed to this trip – helping the brethren in any way we can. This was my oportunidad mediana for the day.

Oportunidad Grande: From la impresora, we went across town to a small Christian bookstore in a mall, so that Atilito could pick up a few books he had ordered. The subject came up about study books for the ten new pastors, and I tuned in to the conversation. Here is our oportunidad grande, amigos. But you need some background to appreciate it, so here's the summary:

Fast-forward to today. In the ensuing three years, ten new churches – and ten new pastors – have been raised up. But these new pastors need their own “libraries.” Most of the brothers have incomes that would make you blush in shame should you ever complain about the things you “don’t have.” (If you have problems with covetousness and loving the things of the world, a few short-term missions trips may help cure you.) Buying three hardback reference books in Spanish, at an average retail price of over US$50 each (about Q400), is out of the question for most of these men. Even with a 35% discount off retail for buying ten at a time, the price per library is about $US 110 (depending on the exchange rate). I’m not going to get out the violins or start the tear-jerking soundtrack that often seems to accompany fund-raising, Christian and otherwise. In 2008 I reported the need, but (other than Brother Al and Sister Sue) our fellowship, readers, and audience didn’t have any part in actually raising the funds. I pray that it will be different this time. If the Lord puts it on your heart, share something toward this need; the workers can work much more effectively with a few simple tools.

Oportunidad Pequeña: Now for today’s oportunidad final. I don’t call it small because of its significance, because to my heart, I think it will prove to be one of the most moving experiences of the trip. No, I only call it pequeña because, to all outward appearances, it was so obscure and insignificant as to be beneath the attention of anyone without Kingdom values. About 17:45, Gladys sat down next to me and said, “We have cell group meetings tonight. I don’t feel strong enough to share at my meeting tonight. Atilio has a meeting in another house. The teens have their own meeting at the church. I have been teaching about the miracles of Jesus. I would like you to share for me tonight, because I don't feel up to it.  I will interpret.” I asked, “Um, when do we leave?” “In forty-five minutes.” As Hermano Bobby Hoyle is wont to say about these trips, “Expect the unexpected, and go with the flow.”

Less than two hours later (remember, it’s at least a half-hour commute to the neighborhood where this church meets) “the flow” took me to a small barrio home, just across the street from the church entrance. To get in, we had to pass a street-vendor table, of which one of the home’s residents is the proprietress. The main room of the home was lit by a single bare bulb hanging from the ceiling. A sister had to climb on a stool in order to switch on the other bare bulb. (Electric bills must be paid by the poor as well as the rich, so we don’t use two lights when one will suffice.) The walls (mainly painted green as I recall) and floor are concrete, and there were no windows that I could see, even streetside. Bright red plastic, stackable armchairs and and green backless plastic stools appeared from somewhere and were formed in a semicircle. Including Gladys, three small children, and me in the count, there were twelve of us in these spartan circumstances, and we ranged from age 5 to almost 60. (I pick the latter number, having certain inside information.)

No, wait; that attendance count is wrong. There were thirteen of us, because the Lord was very present. Gladys opened in prayer, another sister led a worship song, two shared brief testimonies, and then I was introduced (though I didn’t follow all that was said, which may be just as well), and then I began sharing about Jesus’ first miracle, as recorded in John 2. Gladys closed in a long, passionate prayer, we said our goodbyes, and took our leave. About 21:00 the other meetings broke up, five of us filled el pickup’s cab (yes, it’s a double cab), others piled into the truck bed, and off we went delivering some of the saints to their respective homes on the dimly lit streets in other neighborhoods. Then, with all the Chávezes once more in the cab, we drove past La Casa Crema, Guatemala’s analog to our White House, and the Palacio Nacional, on our way home.

About that oportunidad pequeña, that small, bare-bulb-lit meeting: On the way home, unable to fully enter into all the Spanish banter in the truck’s cab (though I did try my hand at my third Spanish pun, which was probably even worse than my usual ones en ingles), I thought a lot about that humble meeting and the people who attended. I would much rather have ministered there tonight than in some large, loud, bright, “successful” church. This venue and these dear folks – they are exactly what Jesus would have encountered in Nazareth, in Capernaum, and all the little villages in which He ministered. Are you trying to discover where Jesus is? He’s present in millions of small, obscure home meetings like this one – around the world, every day. “Where two or three are gathered together in My name, there I am in the midst of them.” Gracias, Señor, for allowing me to attend – and even minister at – this one.