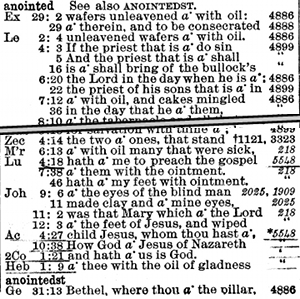 Part of a 'Strong's Concordance' entry on the word 'anointed'

Review of last week's episode, An Unhappy Heresy, the first installment in our study of 1 John 2:18-29.

Study on the words anoint and anointing

We'll see how this NT concept of anointing ties in with John's use of the word abiding, and what it all has to do with the word Christian (a chri— word we haven't yet touched on).

Next post: 020 Kernels of Wheat – Do You Have Indoor Plumbing?