A Letter Home from Costa Rica 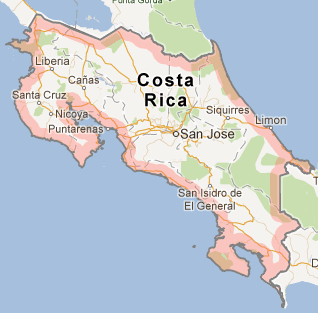 Had another good day today, but it would have been better if I could have Skyped you again. Oh, well, I can't have everything. No sense being greedy, as I've had quite a bit on this my 44th spiritual birthday.

We had an outstanding time of ministry this evening. Pastor Virgilio Zamora-Fernández, his wife Kattia, their two small kids, and several people from their church, along with Luis Diego Segura-Alvarado (the young English teacher who was “supposed” to be my translator on Sunday), picked me up and off we went Sarchí, 90 minutes away. In addition to the fact that the pickup time had been moved from 15:00 to 17:15, we were 20 minutes late in leaving because they were waiting for me at the front desk. The clerks claim to have called me in my room. They may have called somebody, but it wasn't my room, since I was sitting four feet from the from the room phone. The second call (my first) sent me running down the stairs. So we got the 18:00 meeting started at 18:15, but, hey, it's Latin America, where nobody sweats 15 minutes.

The meeting went wonderfully well, so don't think I'm selling it short when I tell you that the ride out and the ride back were even better than the meeting itself. Virgilio is hungry to learn (like all the pastors down here), and he pounded me with questions the whole way out and nearly all the way back, along with telling me much more about the ministry journey that he and Kattia have been on the last ten years.

Now, having said that, I preached twice tonight — once to the children, with a children's sermon (little Samuel, complete with blankie) and once to the adults. Of the 60 people attending this evening, exactly a dozen were children, and they were all down front with me, spellbound at something brand new in their experience. (I mean, it doesn't get much stranger than a bearded Gringo who can't speak Spanish trying to pull a baby blanket over himself so that he can “go to sleep.”) The unexpected, but happy, upshot of the children's sermon is that Virgilio has decided they need to start a Sunday School soon. (Truth be told, I think many of the adults enjoyed the “children's sermon” as much as the kids did.) Meanwhile, this is the second country in two months where a “children's sermon” has switched on some light bulbs in the area of children's ministry. (More on that below.)

The Lord had indicated a few days ago that I was to preach on prayer this evening, but it wasn't until this afternoon that He showed me I would be in Luke 11 and 18, and that the subject would be importunity in prayer. I did not know the reason for the subject and passages the Lord picked until the ride outbound. This little church is bursting at the seams. (The meeting tonight was SRO, and even then others were standing outside on the covered walkway near the door.) They're meeting at a couples' home, in a not-nearly-up-to-building-code add-on room that is no bigger than the Stricklands' great room. They have been praying for a building, specifically for an edifice down the road that used to be a church ten years ago (now a residence), with a now-unused Sunday School building just behind. They're also praying for the empty lot next to that building. (These pastors down here are continually growing in their thinking and always thinking about their growing.) The current facility has places in the wooden floor that flex enough to uneasily remind one of the fate of Dathan and Abiram; and the floor of the whole room would instantly fail the marble test — everything flows toward the back of the room, even as the room perches over a hill that rolls down toward the back of the property. I felt like I was the Leaning Tower of Pisa most of the night.

But back to the message: Not only was Samuel's call acted out for the children, but the whole “Friend, lend me three loaves” story was acted out as well, complete with a loudly snoring friend (see? all my nightly practice sessions really help!), angry, shouting neighbors (especially the Gonzálezes and Gómezes), crying babies (in my story expansion only, not in the meeting room), rotten eggs and basura getting thrown (ditto, thank goodness), and so forth. I should have brought out the village constable, too. (Maybe next time, if there is a next time for this message.) I'm sure they never heard a message quite like it — and I know I never preached one quite like it! Not only that, but for some reason, it's more fun to act out in Spanish than in English. There's something about the cadences of the LBLA translation that helped with that, though I can't put my finger on exactly why. Then we did a shorter rendition of the widow and the unjust judge in Luke 18. I think somewhere deep down, I am un jamón.

All this was tied into something practical — importuning and annoying God “shamelessly” for their new building. That brought it all home. I hope Father has some Excedrin Migraine handy; I think He's going to need it if He decides to play “the unjust judge” or the friend who won't lend the bread with this congregación! I offer as “Exhibit A” that in his message recap, Pastor Virgilio had already upped the ante on the “knocking” analogy by using a sledgehammer illustration!

BTW, who does Pastor Jorge think I am, his personal personnel trainer?! 😉  Guess who did his first-ever translation tonight? Yep, you guessed right — Luis Diego! I didn't know that until the ride back. That's my second “trainee” in two days! L.D. did wonderfully well, only missing the beat once (for about three seconds) during the 45 minutes or so that I spoke, and never missing during the children's sermon. Captain Kirk may have found a second (actually fourth or fifth) career as “The Negotiator,” but apparently I now have a side job as “The Initiator” (of translators). “Luis” (or “Diego” — he answers to either) was a bit awed, sobered, and blessed after the following exchange, which started out by him saying to me…

“No, we preached well tonight. When you translate, you share equally in the responsibility and blessing of the ministry of the Word. You, too, are the preacher, the minister, the teacher.”

“This is an answer to prayer for me. I have been wanting God to use me in ministry in this way. I wasted twelve years of my life when I turned my back on Jesus. I can't get those years back, but I want to serve Him now in any way I can.”

He's a bit farther along than Arnoldo, but they equal each other in fervency. (Come to think of it, Luis has the quirk of always translating the phrase “the word of God” as “Gospel,” going either way translationally. Now that I remember, he was doing this Sunday morning, too, when he translated for Pastor Jorge. FYI, that doesn't count as his “first” translator time, because he was going from Spanish to English, not the other way around.)

Afterwards, we were invited to dinner at the host and hostess's home, just the other side of the wall. Their names are Gregorio and Evalina, if I got them correctly. I knew our team back in San José had said that they would wait on going to dinner until I got back. It was a good thing Bobby had shared one of the Costa-Rica-team phones with me (a wise precaution, since I'm always the “sputnik” launched away from the main team body), so that I could call him and say, “Don't wait for me; I've got another invite.” The dinner provided another half hour (at least! I lost track…) of fellowship with Virgilio, Kattia, and six other church members. Luis Diego was still working hard, even through dinner, but it was the lighter fare of banter, ribbing, “how I met my husband,” punning, and the like.

On the way back, we stopped in the nearby town of Grecia (Greece) at a panadería (bakery), still open after 21:00 and doing a brisk business. (Right. Like we needed dessert after that meal!) I was given two small queques (cakes, at least down here), small pastries with which to celebrate my 44th spiritual birthday. ¡Feliz cumpleaños a mi!

I mentioned the ride back (above), but didn't mention topics discussed in the questions Virgilio was asking. (I am glad for the bilingual Bible, as it makes finding passages — in English — much easier, before reading them — en español.) The entire round-trip commute covered subjects ranging from predestination to “How long is a ‘generación' in prophecy?” (And he had no clue about his namesake, the Roman poet Virgil, the author of the eternal classic The Aeneid, the story which follows the remnant who escaped from the sacking of Troy [the latter story told in Homer's Iliad] and their wandering until they founded the city of Rome.) But the topic of children's sermons got top billing on the way back. The Lord kept giving me ideas from Scripture, like various “Bible kids” (e.g., tell the story of the loaves and fishes from the point of view [POV] of the boy who shared his lunch with Jesus), and even (where did this idea come from?!) telling stories from the POV of the animal involved (e.g., the donkey Jesus rode into Bethlehem, the dove released from Noah's ark, the camel who brought Rebekah to Jacob, etc.). And my rendition of the song “Only a Boy Named David” (complete with pantomime) set even more wheels turning. Also, I had an opportunity to explain why were staying at this hotel. The long ride back was way too short…

P.S.: I mentioned my bilingual NASB/LBLA real-leather Bible above. I know you and the girls gave it to me several years ago for Christmas. I have used it quite a bit, though it's no worse for the wear. I bring this up because I believe the Lord wants me to give it to Pastora Cristina tomorrow evening. I didn't want you to think that I was giving up a treasured keepsake because it means nothing; quite the opposite — while I'll gladly give it away because the Lord says to, it's not without a twinge of sacrifice and pain, both because of the sentimental value and its utility. But 2 Samuel 24:24. Just wanted you to know why it's not coming home; but it will be going to a another good home.